From America’s #1 Crime ridden city comes the punk rock/metal mesh sound known as Without MF Order. Scumrock if you will.

Founding member and guitarist Scumby began WMFO with drummer Crash in 1998.
They self released 2 CDs before they met Peter Yarmouth. Peter asked them to appear on the label’s compilation CD Music To Make Your Ears Hurt Trey, released in January 2007. Subsequently WMFO was signed to Black & Blue Records.

The classic photo below was taken at CBGB in 2006 when WMFO opened for Red State Riot with new lead singer Captain Perverto.
Their subsequent CD, DESENSITIVITY TRAINING, recorded in 2007 was released nationally in 2008.
WMFO vocalist/sicko Captain Perverto, and bass player Al Poe rounds out the current lineup. WMFO has toured all over the Eastern and Central United States, as well as multiple West Coast tours, including many a memorable gigs.
They toured all over the USA in support of their CD, and are recording a new CD now.
The Captain or Cap as we like to call him is responsible for most of the humorous (or is that sick?) and controversial lyrics. Take the lyrics exploiting reality TV on “IDLE AMERICANS,” Cap explains why he is your real Idol. A funny twist on St. Louis’ biggest marketing firm is presented on the classic tune “THIS BLOOD’S FOR YOU”. Cap will be the first to tell you that he gives his blood for you and if you get too close blood his blood all over you! He is a real swell guy! WMFO plays it hard and loud and creates their lyrics based on current events, life experiences and the twisted reality within the walls of Caps sick mind. No subject is taboo. 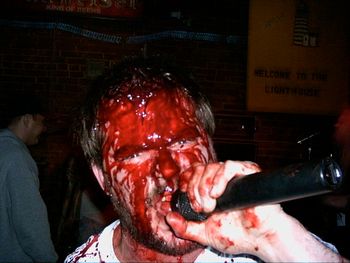 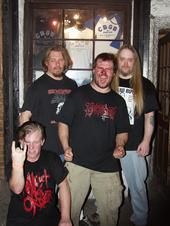